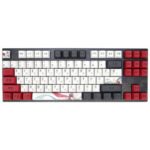 The keyboard of Beijing Opera was created with Chinese opera as the theme, integrating the soul of Chinese culture, including costumes, singing styles, makeup, props and other elements of Chinese opera, and keyboard, one of the “four literary treasures” in the new era.

Based on the design of opera elements, Varmilo Beijing Opera Huadan keyboard integrated other elements which are able to interprete Chinese culture. Transform F1~F12 into twelve rhythms of ancient music. Four gods in ancient orientation diagram represent the arrow keys. The head of the dragon means the beginning and the tail of the phoenix means the end. Each stroke shows Chinese culture

The keyboard case is decorated with gold trim in opera costume to enhance the texture. The back is designed with a Peking opera jade belt, while the metal nameplate is cleverly turned into a belt buckle

In terms of alphabet part, we use homophone of the term in Beijing opera instead of letter keys. As for function keys, the original English words are replaced by their Chinese meanings. Use Chinese to mark each character on the keyboard, thus Varmilo Beijing Opera Huadan creating a strong Chinese style keyboard

Varmilo keyboards come standard with PBT keycaps, which use the thermal sublimation technique in printing

Functions of multimedia and shortcut key